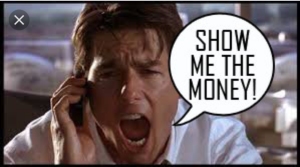 Every time I see a picture of Tom Cruise, it reminds me of him completely going off his rocker, jumping on couches on national TV, and the religious cult he is part of. He reminds me a lot of a certain CEO, standing on a desk at 75+ years old when his stock price broke a new high about 18 months ago, which is an embarrassment and a joke. Careful Randall, you might break a hip. Hope you have good health insurance.

Let’s start off with Randall’s cronies who continue to surf the internet singing the praises of him, EDC (Usborne Books & More), and the stock. This gentleman, goes by the name of Jeremy Blum on Seeking Alpha has made it very clear in the comments of several articles written about EDUC, that he has a good relationship with Randall, has toured the facilities, and what this company is experiencing are just growing pains. Same shit, different day. 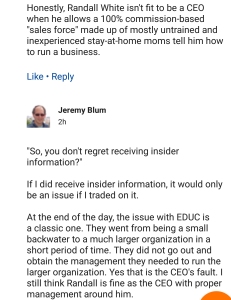 What I find amusing is another commenter called him out on his insider knowledge about the Company. We all know, and have written it here, that Randall has posted things about EDUC that could be SEC Violations. Sooner or later the SEC will wake up and audit him, maybe his board of directors will wake up too. Until then, we wait for the ax to fall.

Jeremy Blum has no creditability.  Why? Because he wrote a cute little puff piece about EDUC on Seeking Alpha back in 2015 and the payout is anywhere from $100.00-$500.00. And then Randall posted that article in his kiss ass club for his ignorant consultants to read, because he wants people to buy his stock.  Funny, he didn’t post any other articles written about him or EDUC. Given the way Blum raves and defends Randall, not the actual company or the stock price, screams that he might want to tread lightly on what he says on open forums.  He seems too vested into a stock he claims he sold last year for a small return. Two words: Martha Stewart.

Here’s a history lesson for everyone:

And, the numbers would be even worse if we take the pre-MLM stock price of $3.00 from a few years ago.  In that case the stock generated a 0% return over 45 years!! On a nominal basis and when you include inflation, you lost money on a real basis over that period!

Are we just talking to a wall? Why are these people so inclined to listen to someone who said last year, “We’re a company that doesn’t require capital for growth.  So, consequently we generate cash, and what do you do with it?  You have a couple of choices, you can buy back stock, or you can pay a dividend…”  “I want shareholders to know that the company is operated pretty much for the shareholders, because I’m the largest one, that’s a unique feature than a lot of other companies who have management that are kind of after themselves, and just take off the top, and do whatever they do.  Whereas in our case, the CEO has marginal salary.  I make more income from my dividend in the stock than I do as a salary.  And I think that’s a nice feature for investors to know that I’m in the boat with the shareholders as well as the management team.”

What is there to argue here?  What is there to defend? So what if you are the largest investor.  It’s a terrible business, always has been and was just made more terrible a few years ago by courting the combustible and risky MLM strategy.

Last week, a smart Consultant posted on the Educational Consultant page about consignment orders being switched over to the new and shiny ticketing system. Yes, that is going to work out grand when in the past, Home Office has said you need to stick out with the same customer service rep until your problem is resolved. This did not go over well with consultants when those reps went on vacation, or quit. And the problems keep happening. 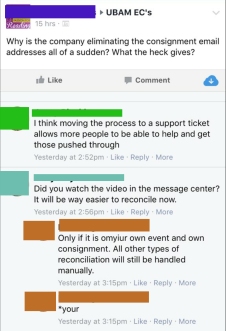 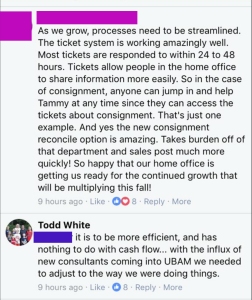 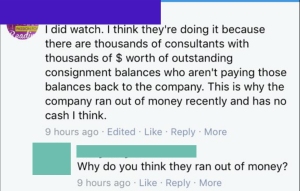 When we saw this, we collectively, said wait, someone IS listening to us! It even brought out of hiding Randall’s son, Todd White, who has been MIA for over a year since the Education Consultant freeze went into place. It was very evident that a director with the initials P.M. was watching the posts and jumped on this thread very fast assuring all was well. Not sure ‘pale blue’ bought it, but apparently 9 people did. Guess what happened next. The entire thread was deleted. The original poster got too close to the fire.

This is not the first time this director has posted things and then quickly deletes them. First and foremost, she is not an actual employer of the company. How would she know if they were doing “fabulously?” We’d venture a guess that if she is anything like the other directors, her words might as well have come out of the mouths of those at Home Office. They spew the same shit, different day too. Ohhh and they bully. They quickly retract or delete all together. Below is an example of the same director above being rude towards a Consultant, slapping her on the wrist for getting out of line. This time she rewrote her post after her failed attempt of putting this Consultant in “time out.” Mature, isn’t it? 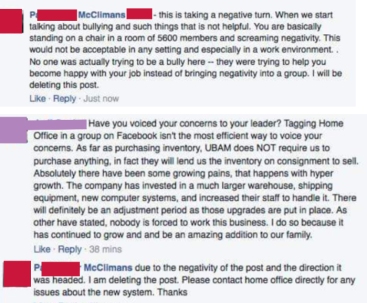 Back to the company problems and their numbers, our homework helper got to working looking at numbers again, and it does not look good.

Search interest for Usborne Books in the US continues to comp in negative territory on a year to year basis, but in an accelerated fashion.  Recent data highlights the worst (-27% Year to Year) data point to-date in the deterioration process (see red shade). 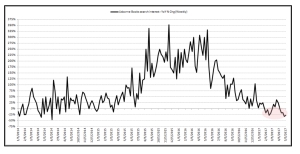 For those interested in what happens to the stock price of a poorly run MLM/pyramid when its search interest/popularity peaks, look no further than BTH (Blithe).  Search interest peaked in August 2012 and then cratered; the stock peaked at exactly the same time and proceeded to crash with it, falling 94% before bottoming (implies EDUC at ~$1)!! 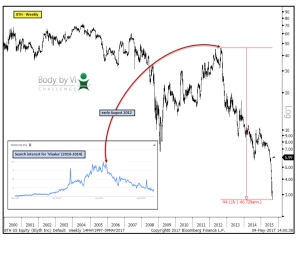 They too had their problems just like EDUC, but probably not as bad from a financial situation and solvency standpoint (CEO wasn’t making loans to meet payroll!). We have confirmation of this from the conference call Randall had with his investors back in January. Search interest has been -25-30% in each of the past two weeks vs the same weeks from one year ago. That is some combo of existing consultants signing on less and fewer new prospects inquiring about the brand, probably skewed toward the latter. It will be interesting to see them fabricate consultant numbers going forward.  From here on out you can’t trust a single consultant count number they publish, and then voila, two days later they randomly release March sales and attempt to refute the 20,000 number by claiming its really 27,0000. I wouldn’t trust what comes out of their mouths about financials, the company, any of it.

Why are his shareholders as blind and defensive as his consultants? They refuse to give up and sinking more money into a bad investment. What is going to take for them to all sell? And how could the board allow him to sit there for 31 years without figuring out a way to get rid of him?

At what point do you give up, walk away, and allow Randall’s ship to drown all on its own? It’s going to drown.

As long as you keep censoring what people are allowed to say in private and secret groups on social media like ‘dark blue’ the smart Consultant, we will continue to allow Consultants to have a voice through this use of this blog. And we will point out the fake, and the lies and the bullying. You can’t muzzle all of us.