Below is a story sent to us who is a former executive for Usborne Books and More. Unfortunately, her story is similar to many others as of late, which we will be sharing with you all at a later time.

A little more than two years ago, I took a leap of faith and signed up with Usborne Books & More, a tiny little direct sales company whose products I fell in love with.

I soon promoted to leadership, then advanced leadership. I sold to and recruited everyone I knew. I ended a friendship for not being supportive of it. It was a real business, I argued, and I love it. I will do this forever…. And I thought I would. Until the little company grew into a behemoth and then decided I was no longer fit to be among them.

Let’s back up a little bit: I love these books. I made amazing friends. Yes, of course I had noticed there was a little bit of cliquey behavior among some teams — I left the leadership retreat my first year partly because of it — but the team I was on was different. We were also growing at a rate five times that of the company. And I was a big part of that. I personally recruited over 100 people in my time with Usborne Books & More, and had around 200 people total in my downline over time.

It wasn’t my first foray into direct sales and being an independent consultant: I was a 31 consultant when I joined Usborne. But Usborne had my heart.

A couple years in, I promoted to executive leader for about a month. Just before that happened, two other things happened:

I was back to senior leader after a month as executive, as of January 2016, and I decided to give Matilda Jane a try. I was honest about it. I posted about it publicly on Facebook when I started as a TK on February 1. I even emailed Usborne consultant services, asking what would happen when/if I repromoted to Executive, because the policy was not clear. They told me that, if I repromoted, I would have to choose. I decided to do both, while still working with my team to promote out leaders.

I had asked Usborne clarifying questions, and they didn’t reply. Months went by. My director was no longer speaking to me, and I finally asked her why. She told me things were going on behind the scenes that prevented her from doing so, and that those things involved me. I reached out to Usborne home office again at this time — April 5, 2016 — and got this reply: 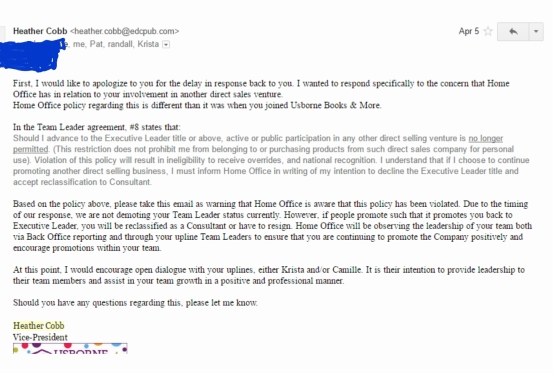 I learned later from the director above my director that the policy she quoted to me, and that she was “warning” me that I had violated, was written in March. She sent it to me in April, saying I had violated it in February. She also told me that they had decided to revoke my leadership status, but that one of my best friends passed away and my director told them it would not be a good time to deliver that news…. Now, I will take a moment to point out that taking away my Usborne business pales in comparison to losing my beloved friend. While I appreciate that she wanted to spare me more heartache, nothing could have made losing her worse; it was devastating.

While I will admit that my heart was not in Usborne as much as it had been after all of this happened — and because I lost another friend or so over this — I was still pushing and promoting the business. It was not as important to me as it had been, of course, but I still loved the products and my team and wanted to keep doing it.

In late July, I decided to buy the Barefoot Books kit because my kids love those books too — and because they are so entirely different. I signed up, saw their amazing start-up incentives; their compensation plan that was so much better than UBAM’s; and their leader structure that was so much more flexible. And those books…. they got me emotionally in a way other books never had. So, I decided I was going to at least try to get my start-up incentives and perhaps sell a little here and there.

I continued training, leading, and pushing my team to promote. I helped with people’s questions as the new system was launching. I even had customers waiting to order when the site came back up…

Around this same time, one of my first line leaders — also a senior leader — decided to leave my team group and one of her three downline leaders decided to go with her. I told her I understood and expected it. And then she told us, in our group  leaders chat, that she wanted to stay in the chat for leader advice. I hesitated, saying I wasn’t sure that was fair to those of us who were going to be staying in the team group and working there, but I would discuss it with others. Everyone agreed it wasn’t really fair, but we would change the chat to just team leader chat, and take our group conversation elsewhere. (I had told this leader that I joined Barefoot, by the way, and one of her downline leaders joined with me — also for the kit, initially). Yesterday, this person sent me a message about what a terrible person I am and how she doesn’t like me (I am paraphrasing and shortening it greatly), and that her downline leaders only stayed with me because they hadn’t seen my “true colors” yet.

One day later, today, at 2:10 p.m. Pacific time, I got an email from Usborne CEO Randall White terminating my relationship with Usborne Books & More. It is below: 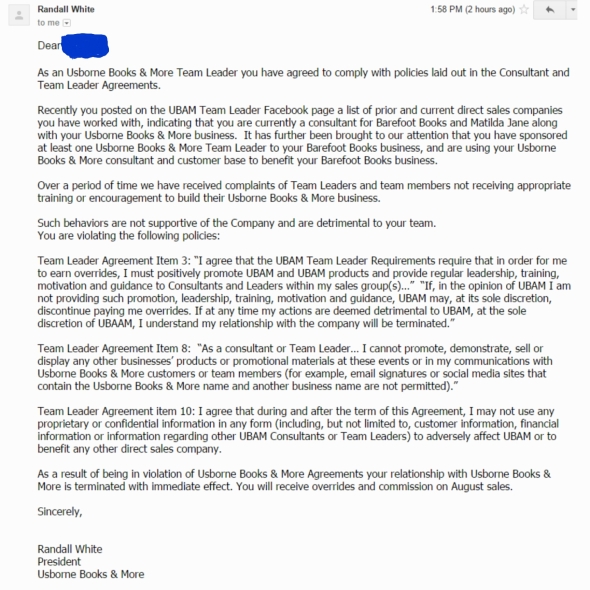 There was a point in time where this might have been devastating to me. However, the last orders I have placed have taken six weeks to ship, and yet customers (and I) pay full-price shipping. This has been going on for close to a year now, with excuses upon excuses. And they have made the quality of some books less (wipe-cleans are no longer the same sturdy pages; Illustrated collections appear to have cheaply glued seams rather than the stitched seams of the past) without lowering — and sometimes even increasing — the prices. I have had to pay customer shipping, make up for damaged books, and I received my most recent order last week with seven damaged books in it (I am guessing now I won’t be able to get them replaced….). I also had two parties open when they decided to terminate with no warning, so I will have to make that up to my customers somehow too, most likely out of my own inventory or pocket.

While we do not endorse or encourage others to sign up with other direct sale companies, we do thank the reader for being so candid in her story, and wish her well on her future endeavors.

That’s my take. Tell me yours.

One thought on “We Are Never Ever Getting Back Together. (Ever)”